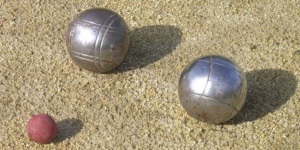 Looks like after the defeat at Cottered PC Great Barford drop in to the bottom 2 again. Looks like it will be a tight end of season – first season at this level.

Next game is away against Edward VII A team on the 22nd August. Last 2 games are at home to the top two teams.

The A Team missed an opportunity to consolidate their position at the top of Division 3 when they conceded 3 on the final end of their match against local rivals Potton to lose by just one shot.

Unusually Malcolm, Bill and Paul were always behind on their rink, and when Ray, Robin and Keith finished 8 shots ahead having lead at one stage by 18, needed to concede no more than one to seal a victory for the team.

But to the obvious elation of at least one Potton player, it was not to be, and with two title rivals winning the A Team slipped to third.